Climate Statement for Summer and August 2021

The first week of August 2021 was showery with low-pressure becoming more dominant as the week progressed. After a dry start, pressure gradually dropped, culminating in a relatively deep area of low-pressure becoming slow moving over the northern half of the country between the 5th and 9th. This brought heavy and thundery downpours to many places, especially between the 5th and 7th. As the low-pressure filled and gradually pulled away to the north at the beginning of the second week the showers became less widespread. Atlantic depressions, which mostly stayed to the west and north of Ireland, continued to dominate the weather for the rest of the second, third and beginning of the fourth weeks, bringing further bands of rain or showers across the country from the west and south interspersed with dry periods and sunny spells. There was some heavy falls in places, which were especially widespread on the 20th and 21st, but in general, rainfall amounts stayed relatively low. It became mostly dry and settled from the 22nd up to the end of the month as high pressure built to the north of Ireland, blocking any active weather fronts from approaching. This brought a lot of warm sunny weather between the 23rd and 28th, especially in the west, but as the high pressure moved slightly to the northwest of Ireland towards the end of the month, cloud, mist and night-time fog become more prevalent.

Temperature: Above average in most places, warmest in the Northwest

Sunshine: Highest in the West and South, lowest in the East

Monthly mean wind speeds ranged from 4.3 knots (8.0 km/h) at Ballyhaise, Co Cavan to 10.9 knots (20.2 km/h) at Mace Head, Co Galway. Gales were reported on Thursday 12th. The number of days with gale force winds ranged from zero days at most stations to 1 day at both Mace Head, Co Galway and Belmullet, Co Mayo. There were no strong gales or storms reported this month. Both the month’s highest gust and 10-minute mean wind speed was reported at Belmullet, Co Mayo on Thursday 12th. The highest gust was 51 knots (95 km/h) while the month’s highest 10-minute mean wind speed was 37 knots (69 km/h). The winds were predominantly westerly or southerly in direction for most of the month but changed to easterly for the final week. 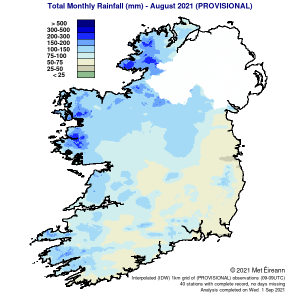 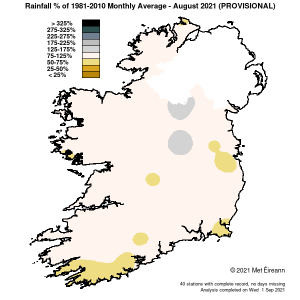 Summer 2021 was warm everywhere and relatively dry overall, especially in the South and East. There was widespread heatwaves during July and dry spells record-ed during June and July. June (provisionally the third driest June on record) was a very dry month with the Jetstream staying mostly to the north of the country. This allowed high pressure to stay in control. It was driest, warmest and sunniest in the Midlands, South and East, with the West and North cooler and cloudier as weak Atlantic weather fronts encroached from the west on numerous occasions. After a dry start, July saw Atlantic low-pressure systems take control for most of the first two weeks, which brought widespread heavy and thundery rain at times. During the third and fourth weeks, blocking high-pressure dominated as the Jetstream moved north, allowing a very warm or hot air mass to move up from the south, culminated in heatwave conditions in many places. The end of July saw the Jetstream returning, bringing Atlantic westerlies with widespread rain at times. The Jetstream stayed to the south during the first three weeks of August keep-ing Atlantic low-pressure systems in control. This brought widespread heavy and thundery rain at times, especially towards the end of the first and third weeks. The final third of August saw the Jetstream weaken and move to the north again, allowing blocking high pressure to dominate and bring mostly dry conditions with some pleasant late summer sunshine at times. 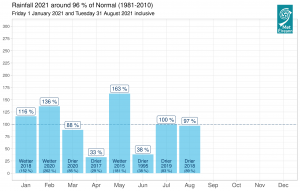 Gridded 2021 rainfall (%) on a monthly basis for Ireland so far