The weather and climate of 2020 shows above average rainfall, temperatures and sunshine.

January was mild and relatively dry with low pressure to the north and high pressure to the south. Storm Brendan affected Ireland on the 13th. February was an exceptionally wet and windy month with a strong North Atlantic Jetstream steering numerous storm systems close to, or over Ireland. Storm Ciara affected Ireland on the 9th and 10th, Storm Dennis on the 15th and 16th and Storm Jorge on the 29th and 1st of March. Low pressure to the north kept Ireland in a cool westerly airflow for the first half of March. Pressure rose steadily from mid-month leading to a mostly dry and cool second half of the month. April and May were very dry, sunny and warm months with drought conditions in many places. Blocking high pressure steered a weakened Jetstream away from Ireland. The pattern change at the beginning
of June led to an unseasonably strong Jetstream dominating the weather for the months of June and July. This brought above average rainfall for both months, and near to, or below average temperatures. August was warm and wet. An active Jetstream in the final third on the month brought two named storms, Storm Ellen on 19th and 20th and Storm Francis on 24th and 25th. The first two thirds of September where warm with high pressure to the south in control. The final third of the month was cool with low pressure dominating. October continued cool. Low pressure dominated the first week, high-pressure the second. The final third of the month was very stormy with Storm Aiden affecting Ireland on the 31st. November was mild overall. Low pressure to the north and high pressure to the south brought a west or south-westerly airflow, with the western half of the country receiving the bulk of the rain. December was cool and wet with Ireland stuck under a deep Atlantic trough in between two blocking high-pressure systems. On Christmas Day, a transient area of high pressure kept it mostly dry before Storm Bella affected Ireland on the 26th and 27th.

EXTREME VALUES for 2020 at SYNOPTIC Stations 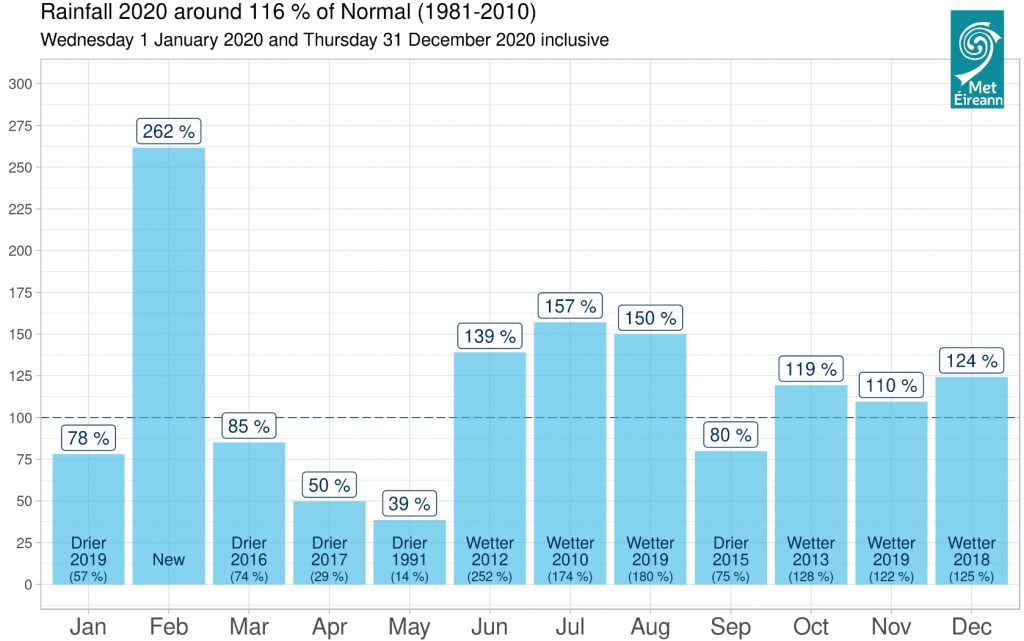 Past weather and climate statements are available at www.met.ie/climate/past-weather-statements.