January was mild and very dry. The first third of the month saw Atlantic low-pressure systems in charge, while the final two-thirds saw high pressure to the south dominate. Storm Corrie and Malik passed close to the north of the country towards the end of the month. February was a mild, wet and windy month dominated by Atlantic low pressure systems. A powerful Jetstream steered three named storms, Dudley, Eunice and Franklin, close to or over the country mid-month, bringing the windiest period of the year. March, the driest of the spring months, was dominated by high pressure to the east over mainland Europe, which brought a lot of sunshine and kept it mild. High pressure shifted to the north of Ireland during April, which continued the direr, milder and sunnier than average theme. May was a warm, relatively dry and cloudy month. High pressure dominated at times, interspersed with periods where low pressure was in charge. June was a relatively mild, Atlantic dominated month, with a mostly southerly and westerly airflow. This kept it wetter, cooler and cloudier in the West and drier, warmer and sunnier in the East. July and August saw high pressure from the Azores building over Ireland on a number of occasions, keeping it warmer and drier than average. A hot continental air mass led to a new record maximum daily temperature for July, while heatwave conditions in August brought a new record maximum daily temperature for August. The three autumn months of September, October and November were wetter than average as low pressure to the west and southwest of Ireland dominated for long periods. This kept the airflow mostly between southerly and westerly, which brought milder than average temperatures. December, the only month of the year with below average temperatures, saw a prolonged cold spell under an Arctic air mass during the first half of the month, followed by Atlantic dominance for the second half.

Rainfall: Below average at most stations 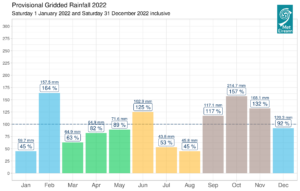 Provisional monthly gridded 2022 rainfall (%) for Ireland on a monthly basis

All mean air temperatures across the country were above their annual LTA. Deviations from mean air temperature for the year ranged from 0.2°C (9.9 °C mean temperature) at Markree, Co Sligo to 1.2 °C (10.8 °C mean temperature) at Phoenix Park, Co Dublin. Mean temperatures for the year ranged from 9.5 °C (0.9 °C above its LTA) at Knock Airport, Co Mayo (its warmest year since 2007) to 11.7 °C (0.6 °C above its LTA) at Sherkin Island Co Cork (its warmest year since 2004). The year’s highest temperature was reported at Phoenix Park, Co Dublin on Monday 18th July with a temperature of 33.0 °C (the second highest temperature ever recorded in Ireland and highest since 1887). The year’s lowest air and grass minimum was recorded at Mount Dillon, Co Roscommon with the lowest air temperature reported on Friday 16th December with -8.8 °C (its lowest min since 2009, lowest min in Ireland since Dec 2010) while the lowest grass minimum was -13.0 °C reported on Wednesday 14th December (its lowest grass min on record (length 17 years)). All stations reported air and ground frost during the year. The number of days with ground frost ranged from 34 days at Belmullet, Co Mayo to 153 days at Mount Dillon, Co Roscommon. The number of days with air frost ranged from 2 days at Malin Head, Co Donegal to 62 days at Mount Dillon, Co Roscommon. It was the warmest year on record at eight stations (record lengths between 10 and 57 years). It was the warmest year since 2007 at nine stations. Ten stations reported their highest daily maximum temperature on record, nine stations on Monday 18th July and one station on Saturday 13th August. Heatwave conditions were reported at seven stations between Tuesday 9th and Sunday 14th August lasting between 5 and 6 days. Overall, 2022’s average shaded air temperature in Ireland is provisionally 10.83°C which is 1.28°C above the 1961-1990 LTA. This makes 2022 the warmest year on record, 0.06 °C warmer than 2007 the previous warmest year. 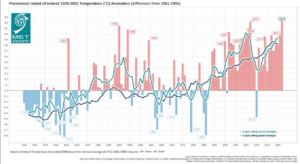 Sunshine: Sunniest in the East

Ireland’s warming trend continued in 2022, and we are warming in line with the global average. Other countries are warming at a greater rate than Ireland and the summer of 2022 saw multiple heatwaves and record-breaking temperatures across Europe and around the world. The spring and summer of 2022 were drier than average in Ireland, which had negative consequences for agriculture and wider society.

The latest Irish climate change projections indicate further warming in the future, drier summers on average and an increased chance of heatwaves and periods of drought. The Irish summer of 2022 is broadly consistent with projected future trends. While climate change projections also indicate a trend toward warmer winters, cold periods like those experienced this December cannot be ruled out in any particular year.

Keith Lambkin, the Head of Met Éireann’s Climate Services Division said: “Climate change has changed the odds of getting more frequent, more extreme heat related events. Thanks to over a century of dedicated weather observations here in Ireland, we know that 2022 brought us record-breaking extremes as well as what is likely to be the warmest year on Irish record. It is essential that we must continue to adapt to ensure our national infrastructures and planning are best suited to both current and future warming.”