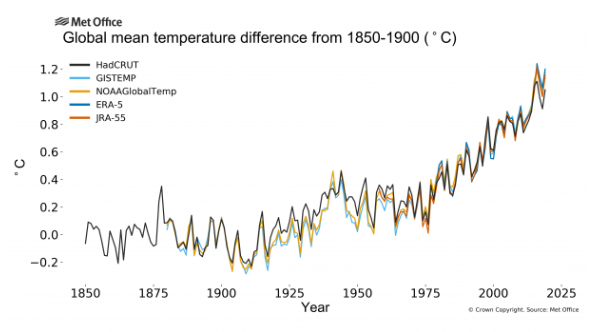 The year 2019 was the second warmest year on record after 2016, according to the World Meteorological Organization’s consolidated analysis of leading international datasets.

Average temperatures for the five-year (2015-2019) and ten-year (2010-2019) periods were the highest on record. Since the 1980s each decade has been warmer than the previous one. This trend is expected to continue because of record levels of heat-trapping greenhouse gases in the atmosphere.

Averaged across the five data sets used in the consolidated analysis, the annual global temperature in 2019 was 1.1°C warmer than the average for 1850-1900, used to represent pre-industrial conditions. 2016 remains the warmest year on record because of the combination of a very strong El Niño event, which has a warming impact, and long-term climate change.

“The average global temperature has risen by about 1.1°C since the pre-industrial era and ocean heat content is at a record level,” said WMO Secretary-General Petteri Taalas. “On the current path of carbon dioxide emissions, we are heading towards a temperature increase of 3 to 5 degrees Celsius by the end of century.” 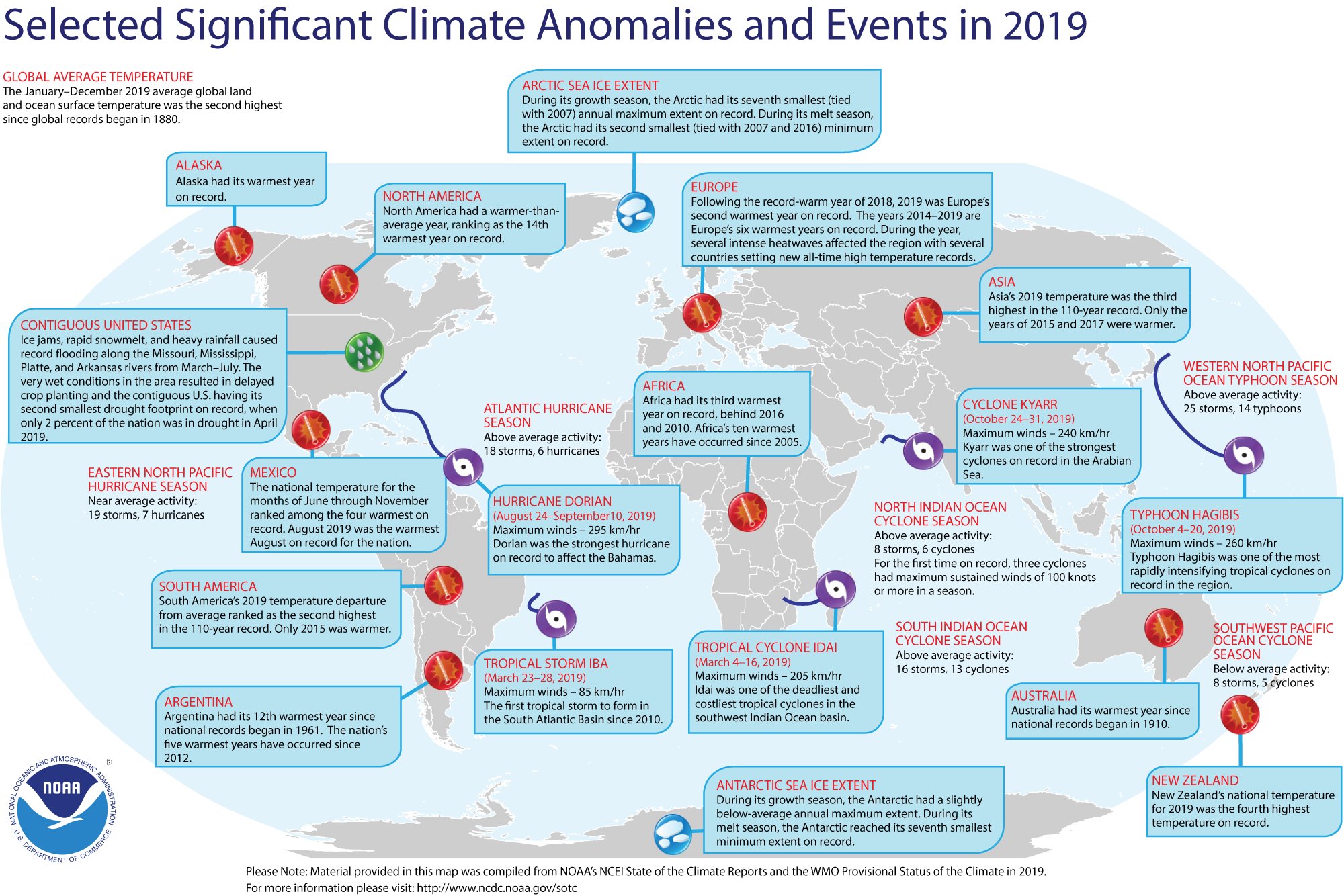 Temperatures are only part of the story. The past year and decade have been characterized by retreating ice, record sea levels, increasing ocean heat and acidification, and extreme weather. These have combined to have major impacts on the health and well-being of both humans and the environment, as highlighted by WMO’s Provisional Statement on the State of the Global Climate in 2019, which was presented at the UN Climate Change Conference, COP25, in Madrid. The full statement will be issued in March 2020.

“The year 2020 has started out where 2019 left off – with high-impact weather and climate-related events.  Australia had its hottest, driest year on record in 2019, setting the scene for the massive bushfires which were so devastating to people and property, wildlife, ecosystems and the environment,” said Mr Taalas.

“Unfortunately, we expect to see much extreme weather throughout 2020 and the coming decades, fuelled by record levels of heat-trapping greenhouse gases in the atmosphere,” said Mr Taalas.

More than 90 percent of the excess heat is stored within the world’s ocean, and so ocean heat content is a good way to quantify the rate of global warming. A new study published 13 January in Advances in Atmospheric Sciences with data from the National Oceanic and Atmospheric Administration/National Center for Environmental Information and the Institute of Atmospheric Physics showed that ocean heat content was at a record level in 2019. The past five years are the top five warmest years in the ocean historically with modern instruments, and the past ten years are also the top ten years on record.

It also uses reanalysis datasets from the European Centre for Medium Range Weather Forecasts and its Copernicus Climate Change Service, and the Japan Meteorological Agency.  This method combines millions of meteorological and marine observations, including from satellites, with models to produce a complete reanalysis of the atmosphere. The combination of observations with models makes it possible to estimate temperatures at any time and in any place across the globe, even in data-sparse areas such as the polar regions.

The spread between the five data sets was 0.15°C with both the lowest (1.05°C) and the highest (1.20°C) being more than 1°C warmer than the pre-industrial baseline.