Highest Temperature Recorded in Ireland since 1887

Over recent decades we have observed an increase in the frequency, duration and intensity of extremely hot weather across most global land regions. Human-caused climate change resulting from greenhouse gas pollution is the main driver of this increase in extreme heat.

The Phoenix Park has provisionally recorded the highest temperature since its weather station opened in the early 1800s, reaching 33.0°C on Monday 18th July 2022 around 3:30pm, which is:

Europe is currently experiencing one of the hottest and driest summers on record, with widespread wildfires, excess deaths and water shortages reported in Spain, France and Portugal. The UK has issued its first ever red warning for exceptional heat as temperatures could reach 40°C in some places.

While extremely hot weather does occur within natural climate variability, the kinds of temperature extremes we are seeing in Europe are directly influenced by climate change. Keith Lambkin, Head of Met Éireann’s ‘Climate Services Division’ said “ Due to climate change, we are expecting to see heatwaves become longer, more frequent and intense than in the past. This increase in heat, increases the odds of temperature records being broken.”

Sweltering heat forecast from 17th to 19th July – what to expect

While Europe has been basking in what seems like an eternal heat wave all summer long, Ireland has seen mostly a very average summer. Over the next few days however a combination of factors will help to steer those higher temperatures our way, if only for a relatively brief spell of very warm temperatures.

So what is causing it? 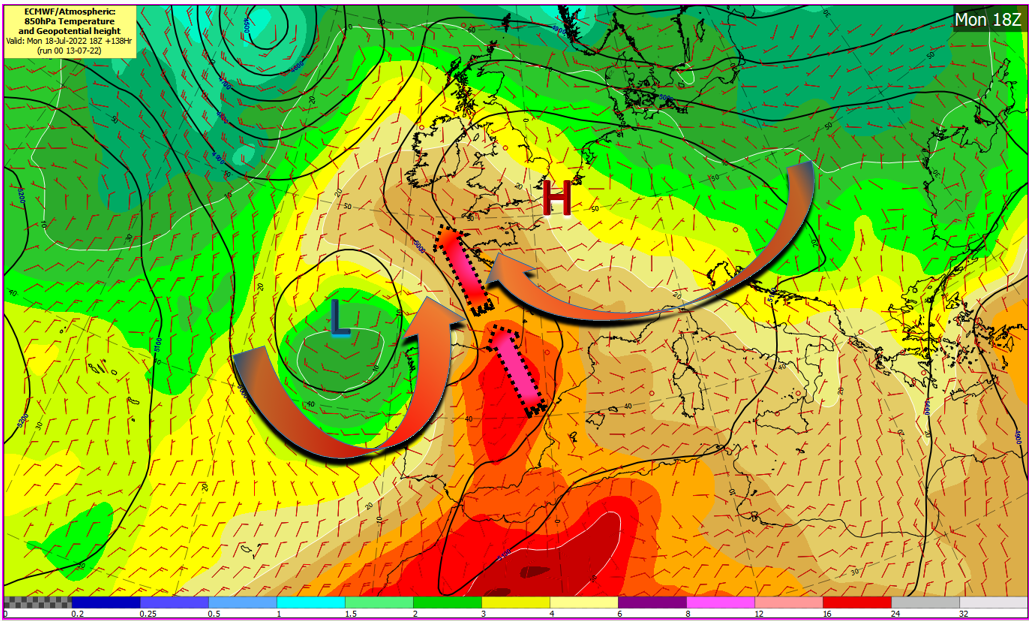 Initially a portion of the Azores High will extend from the southwest over Ireland for the weekend. It will bring a rise in temperatures but still hold the warmer air to the south. As the high pressure moves away to the east,  the anticyclonic, or  clockwise rotation will steer up air from the southeast, but the real contributing factor is how it interacts with a low pressure system developing off the coast of Portugal and gradually meandering northwards. The cyclonic or anticlockwise flow of the low working in conjuction with the anticyclonic flow from the high will generate a strong surge of warm air between both systems thus pushing the warm air towards Ireland, transporting the airmass that has brought exceptional temperatures to Europe, towards Ireland.

What temperatures should we expect?

While the high builds in on Friday and Saturday the high temperatures will range generally in the low to mid 20’s. There will also be some upper cloud at times making sunshine a little hazy and there is a chance of a few showers too.

As the high begins to drift a little to the east on Sunday, temperatures will rise to mid to upper 20’s with temperatures possibly surpassing 30 locally on Monday. There is a little more uncertainty regarding Tuesday but it does look like it will be another hot day and perhaps as hot if not hotter than Monday. While this warmer air moves in our direction there will be the chance of a few thundery bursts especially on Tuesday. 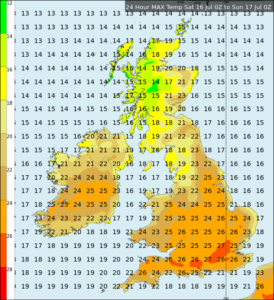 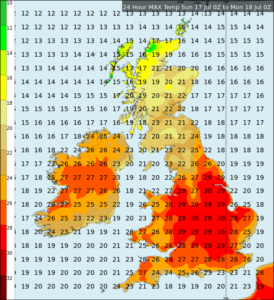 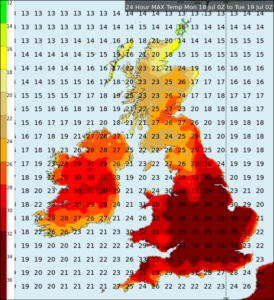 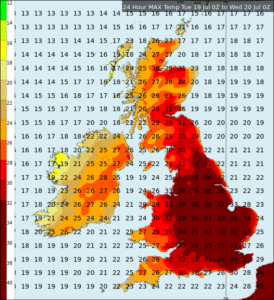 With temperatures soaring, it is important to remain hydrated and be Sun Smart, that goes for animals as well as ourselves. Be prepared and remember to Be Summer Ready

The night time temperature will also be very warm and humid with temperatures on Sunday and Monday night not likely to fall below the mid to high teens and in some areas they may not fall below 20°C, which is known as a Tropical night.

We have issued a Status Yellow High Temperature warning for Ireland.

On Sunday, Monday and Tuesday exceptionally warm weather will occur over Ireland with daytime temperatures of 25 to 30 degrees generally and possibly up to 32 degrees in places on Monday. Night time temperatures will range from 15 to 20 degrees. 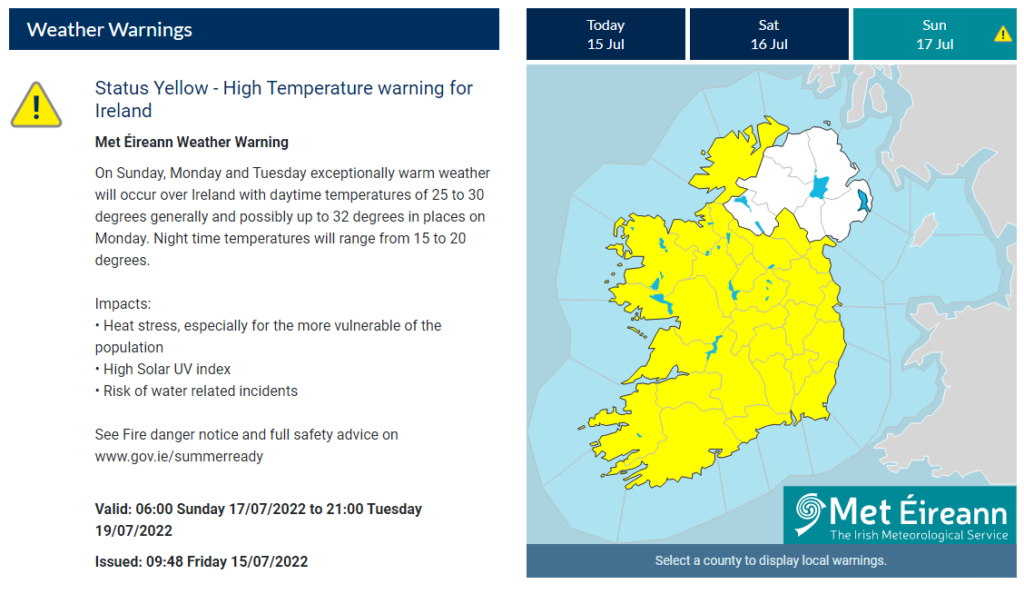 Currently it looks as if the breakdown will happen on Tuesday night into Wednesday as the Low pressure system moves up over Ireland steering in cooler air from the west for the rest of the week. This will also bring some wet conditions on Wednesday.