Storms in Ireland during February

Stay up to date with the latest forecasts and warnings on www.met.ie/warnings.

Ireland’s geographical location exposes it to the influence of storms from the North Atlantic, particularly in winter months. These storms are typically extra-tropical cyclones, also called a mid-latitude cyclone, a large low-pressure area that undergoes cyclogenesis (strengthening of cyclonic circulation in the atmosphere), such  storms are often notable for their heavy rainfall and strong winds. 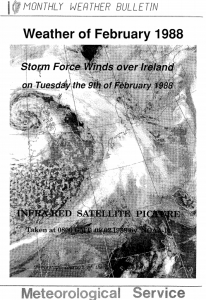 Another February storm was Storm Darwin in 2014. Darwin occurred during a particularly unsettled period over the 2013/14 winter, characterised by a strong upper level jet steam over the Atlantic that steered a succession of gale or storm force depressions over Ireland.

The last February storm was a deep depression, named Storm Erik (by Met Éireann). Erik approached from the Atlantic and tracked to the northwest of Ireland early Friday morning 8th February 2019. It moved to the northwest of Ireland and gave two periods of very strong winds. One early on Friday the 8th and another swath later Friday evening and early morning of the 9th. It left 1,700 homes in Ireland without power along with very high seas and coastal flooding.

Stay up to date with the latest forecasts and warnings on www.met.ie/warnings.