There is no clear, consistent definition of a drought but is generally defined as a period of abnormally dry weather over an extended period that causes a considerable water imbalance that can lead to water shortages, crop damage, low river flows or depletion of groundwater and soil moisture. It occurs when evaporation and evapotranspiration exceed precipitation for a considerable period. In Ireland, droughts usually occur during the Spring/Summer, when a persistent high-pressure system results in warm, dry weather for an extended period.

High pressure dominated through most of spring (March, April, May) 2020 and through most of the first week of June, which led to very dry conditions, especially in the East. Percentage of Spring rainfall values ranged from 31% (rainfall total of 52.6 mm) at Phoenix Park, Co Dublin, its driest Spring on record (record length 170 years) to 85% (rainfall total of 204.7 mm) at Athenry, Co Galway. Click here for a detailed ‘Spring 2020’ report.

Agricultural drought – refers to the shortage of precipitation during the growing season that impinges on agricultural activities leading to increased soil moisture deficits that restricts growth. Met Éireann operates a Soil Moisture Deficit (SMD) model that ranges from -10mm where the ground is waterlogged, to 75+mm that indicates drought conditions. The table below relates SMD values to real world physical meanings. 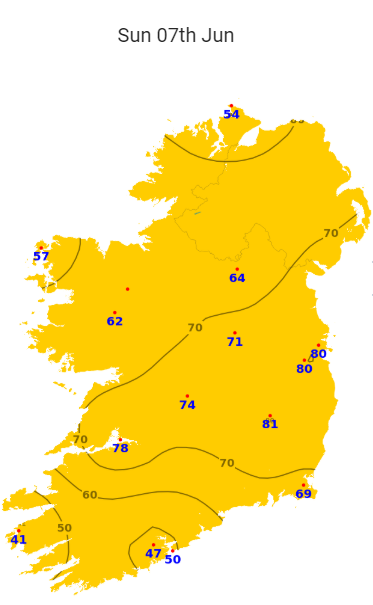 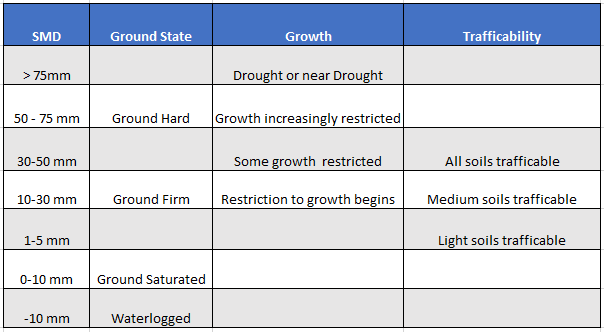 The current soil moisture deficits (SMD) range from 80mm in Dublin to 41mm at Valentia, Co. Kerry. SMD’s in excess of 75mm indicate drought conditions. The drought conditions in Dublin and in parts of its surrounding counties are having a strong detrimental effect on growth. Growth is increasingly restricted in most other areas of the country.

Climatological/Meteorological drought occurs when the amount of precipitation received in a specific area is considerably less than normal. There are three different classifications.

–  A dry spell is a period of 15 or more consecutive days with less than 1 mm of rainfall.

–  An absolute drought is a period of 15 or more consecutive days with less than 0.2 mm on each.

–  A partial drought is a period of at least 29 consecutive days with a rainfall total averaging less than 0.2 mm of rain per day.

Absolute drought, partial drought and dry spell conditions were reported at many stations across the country during the Spring. Dry spells are ongoing at four of our Synoptic stations, see table below. Click here for a detailed report on ‘Climatological Droughts and Dry Spells 2020’. 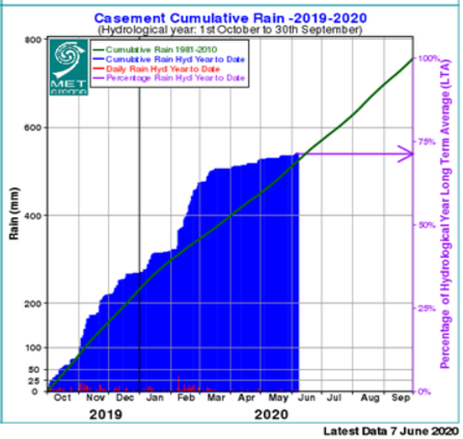 Although nearly all stations have recorded near normal rainfall amounts for the Hydrological year so far, assisted by the heavy rainfall in February, the potential evapotranspiration and evaporation values are up to 15% above normal in some areas due to the recent above normal temperatures and sunshine levels resulting in below normal water levels, more pronounced in the East.