Mostly mild. Wet in the Midlands, South and East

September was relatively mild and wet overall. After a dry start, a cut off upper level trough of low pressure, which moved down from the north, stalled just to the southwest of Ireland. The associated slow moving surface low pressure system dominated the first week of the month, leading to numerous active weather fronts and pulses of heavy, sometimes thundery, rain or showers crossing the country from the south or southwest in the cyclonic flow, with the bulk of the rain falling in the Midlands, South and East. The second week saw further bands of rain or showers crossing the country associated with low pressure to the west of Ireland, with further active Atlantic weather fronts crossing the country on the 11th. High pressure moved in from the west on the 13th and dominated the third week of the month, bringing mainly dry conditions with varying amounts of sunshine and some cool nights. Another active Atlantic weather front crossed the country on the 22nd as the high pressure pulled away to the east. A cooler air mass followed from the northwest as high pressure built again to the west of Ireland. A cold front crossed the country from the northwest on the 27th, introducing a cooler Au-tumnal polar maritime air mass. The month finished with further active Atlantic weather fronts crossing the country from the west, bringing heavy rain and windy conditions.

Rainfall: Above average in most places, highest in the Midlands, South and East 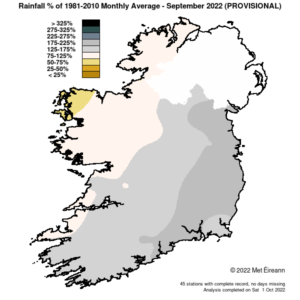 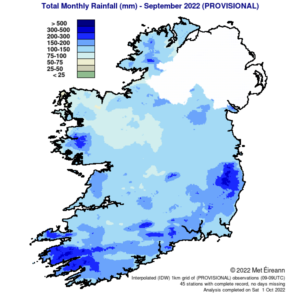 Sunshine: Sunniest in the Southwest, dull in the East