October was a very mild and wet month, dominated by Atlantic low pressure systems, with the airflow mostly between southerly and westerly. The first half of the month saw low pressure to the north and northwest of Ireland, steering several Atlantic weather fronts across the country from the west and southwest, interspersed with sunny spells and showery periods. Active weather fronts brought widespread heavy rain on the 4th, 5th and 9th, with the bulk of the rain in the West. A semi stationary trough of low pressure stalled to the southwest of Ireland for the second half of the month. This steered up numerous active weather fronts and surface low pressure systems from the south and southwest, which brought widespread spells of heavy and often thundery rain, interspersed with bands of heavy and often thundery showers, with the South, East and Midlands worst affected during this period. Active fronts brought heavy rain on the 15th and 16th, with some flooding in the South. A deep area of low pressure to the southwest of Ireland, named storm Armand by Portuguese weather service, steered up a very warm and moist air mass from the southeast over Ireland, which brought some very active thunderstorm activity and heavy rain on the 19th, especially in the South and East. Active weather fronts brought widespread rain on the 22nd and 23rd, with further falls of heavy rain on the 28th and 31st, especially in the Midlands and South.

All rainfall totals were above their 1981-2010 Long-Term Average (LTA) for the month. Percentage of rainfall values ranged from 123% (the month’s lowest monthly rainfall total of 100.7 mm) at Casement Aerodrome, Co Dublin (its wettest October since 2011) to 203% (monthly rainfall total of 230.4 mm) at Moore Park, Co Cork (its wettest October on record (length 58 years)). Monthly rainfall totals were as much as 255.9 mm (144% of its LTA) at Valentia Observatory, Co Kerry. The highest daily rainfall total was 54.9 mm at Cork Airport, Co Cork on Sunday 16th (its highest daily value for October since 1995). The number of rain days ranged from 20 days at both Dublin Airport and Casement Aerodrome, Co Dublin to 30 days at Finner, Co Donegal. The number of wet days ranged from 16 days at several stations to 26 days at three stations. The number of very wet days ranged from 2 days at Dublin Airport, Co Dublin to 10 days at Valentia Observatory, Co Kerry. Along with Moore Park, six other stations had their wettest October on record. These were Knock Airport, Co Mayo with 217.5 mm (record length 25 years), Mount Dillon, Co Roscommon with 182.8 mm (length 18 years), Gurteen, Co Tipperary with 159.8 mm (length 14 years), Mullingar, Co Westmeath with 208.8 mm (length 72 years), Ballyhaise, Co Cavan with 205.2 (length 7 years) and Mace Head, Co Galway with 209.3 mm (length 14 years). 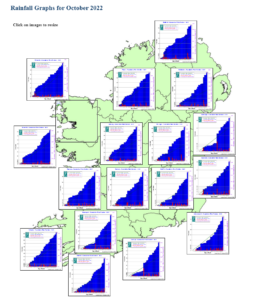 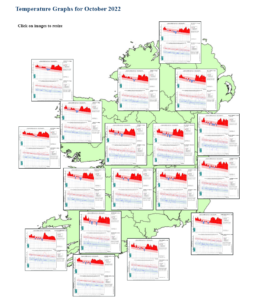 Sunshine: Sunny in the East, dull in the North and Southwest 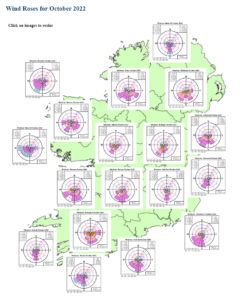