Recent Octobers in Ireland: In the most recent and previous Octobers, the weather was typically changeable with a few storm events. October 2016 was mainly influenced by anticyclonic conditions allowing for predominantly dry settled conditions and no strong gales or storms reported. October 2017 brought the memorable ex-Hurricane Ophelia and then Storm Brian with violent storm force winds and strong gales reported at many stations throughout the country. October 2018 was a cool, dry month with above average sunshine values and the major weather event that month being Storm Callum which led to widespread heavy rain on the 12th and 13th. October 2019 was mainly sunny and cool but wet in the South, ex-hurricane Storm Lorenzo brought unsettled weather at the start of the month. October 2020 was predominantly cool, wet, and windy and storm force winds were reported during Storm Aiden which developed towards the latter stages of the month. Storm Aiden, on Saturday 31 October 2020, is the last time storm force winds were observed across Ireland.

October 2021 was mild and wet overall with Atlantic depressions to the west and northwest of Ireland dominating and keeping the airflow mostly between southerly and westerly. The first week saw low-pressure to the northwest steer Atlantic weather fronts across the country from the west and southwest, interspersed with showery periods and sunny spells. A deep area of low-pressure, containing the remnants of ex hurricane Sam, stalled to the west of Ire-land towards the end of the first week. This steered a very warm and moist southerly airflow across the country with trailing weather fronts, which brought some very heavy falls of rain, especially in the West and Southwest on the 8th and 9th. The Atlantic depressions stayed further away to the west of Ireland between the 10th and 15th, allowing high pressure to build over the country from the south, keeping it mostly dry. As the high pressure pulled away to the east at the beginning of the third week, low-pressure systems moved closer to Ireland once again, bringing bands of rain and showers from the south and west on most days up to the end of the month. An active and slow moving weather front gave some very heavy and widespread falls rain on the 27th and 28th, especially in the South. The month finished with a deep area of low-pressure bringing widespread wet and windy weather across the country on the 31st as it passed close to the Northwest of Ireland.

Rainfall: Above average in most places, wettest in the South and West 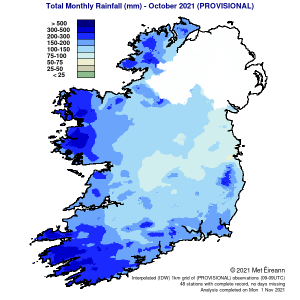 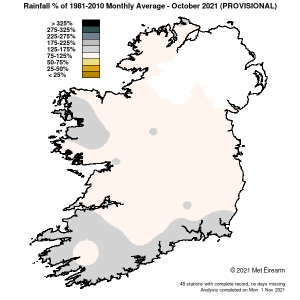