Cool, wet and windy
The month began with an upper level trough of low pressure moving down from the northwest and stalling over Ireland and the UK for most of the first week. This kept it cool and brought several bands of frontal rain or showers over the country in a cyclonic flow, including an active weather front from the east on the 4th. Another low-pressure system brought widespread heavy rain from the southwest on the 7th, which was followed by a cool and showery polar maritime north or north-westerly airflow for most of the second week with high pressure developing to the west of Ireland. High pressure built just to the north of Ireland at the beginning of the third week, which kept it mostly dry up to the 18th in an easterly airflow. Active weather fronts associated with a deep area of low pressure moved in over the country from the southwest and gave widespread heavy rain on the 19th and 20th. This was the beginning of a very wet and windy spell of weather dominated by an active Jetstream, which brought a series of deep Atlantic low-pressure systems close to or over the country during the final third of the month. This culminated with Storm Aiden rapidly developing and tracking close to the Northwest coast on the 31st bringing widespread gales and heavy rain. 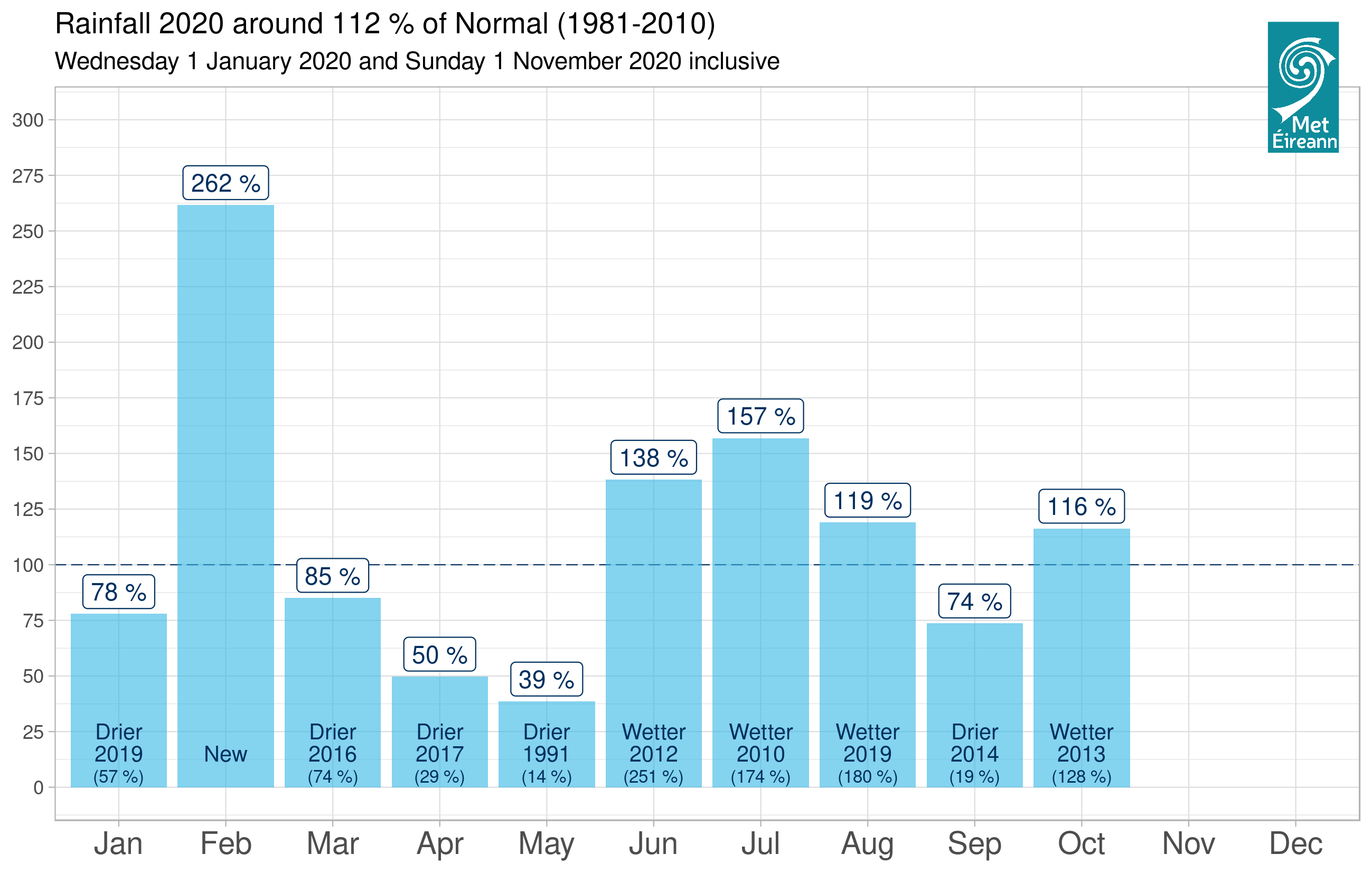 Temperature: Below average everywhere
All mean air temperatures across the country were below their Long-Term Average for the month. Deviations from mean air temperature ranged from -0.8 °C (10.3 °C mean temperature) at Shannon Airport, Co Clare to -0.1 °C (10.1 °C, 9.4 °C mean temperature) at Phoenix Park, Co Dublin and Mullingar, Co West-meath respectively. Mean temperatures ranged from 8.6 °C (0.3 °C below its LTA) at Knock Airport, Co Mayo to 11.7 °C (0.4 °C below its LTA) at Sherkin Is-land, Co Cork. The month’s highest temperature was reported at Newport, Co Mayo on Saturday 3rd with a temperature of 16.8 °C. The month’s lowest air mini-mum was recorded on Thursday 1st at Markree, Co Sligo with -0.8 °C while the lowest grass minimum was -3.0 °C reported at both Oak Park, Co Carlow on Thursday 1st and Moore Park, Co Cork on Thursday 22nd. More than half of stations reported ground frost. The number of days with ground frost ranged from zero days at a few stations to 12 days at Markree, Co Sligo. Less than half of stations reported air frost. The number of days with air frost ranged from zero days at Phoenix Park, Co Dublin to 1 day at both Markree, Co Sligo and Mount Dillon, Co Roscommon.