Dry everywhere, sunny and warm in the South and East

June was dry overall with high pressure in control for most of the month. The high-pressure systems kept the Midlands, South and East of the country very dry, warm and sunny at times. Weak Atlantic weather fronts associated with low-pressure systems to the north of Ireland did affect the west coast on numerous occasions however, keeping in stubbornly cool and cloudy at times. The beginning of the first week saw weather fronts approaching Ireland from the west and south, giving some rain in these locations, but the rain generally died out before reaching the East and North of the country, as high pressure to the east of Ireland became dominant by the end of the week. Further weak weather fronts crossed the country during the second week, but rainfall amounts stayed generally low as high pressure, first to the east, then to the south, stayed in control. The third week again saw weak weather fronts affecting mainly the western half of the country for a few days before high-pressure, first to the south, then to the west, re-established control bringing mainly dry weather, but with a cooler northerly airflow. The beginning of the fourth week saw widespread rain as Atlantic weather fronts crossed the country from the northwest, but again amounts stayed relatively low in most places. High pressure to the west of Ireland dominated for the rest of the month keeping it dry everywhere.

Rainfall: Below average everywhere, especially in the Midlands and East

Temperature: Above average in most places, coolest along the West coast

The majority of mean air temperatures were above their Long-Term Average (LTA) for the month. Deviations from mean air temperature ranged from -0.7°C (13.1 °C mean temperature) at Mace Head, Co Galway to 1.2 °C (14.7 °C the month’s highest mean temperature) at Phoenix Park, Co Dublin. Mean temperatures for the month were lowest at Knock Airport, Co Mayo with 12.2 °C (on its LTA). The month’s highest air temperature was reported at Phoenix Park, Co Dublin on Sunday 13th with a temperature of 25.6 °C (7.4°C above its LTA). Both the month’s lowest air and grass minimum temperature were recorded on Tuesday 22nd at Mount Dillon, Co Roscommon. The lowest air minimum was 1.3 °C (7.6°C below its LTA) while the lowest grass minimum was -5.1 °C. There was no air frost reported this month. The last June Frost Day occurred on Saturday 23 June 2007. Less than half of stations reported ground frost. The number of days with ground frost ranged from zero days at a few stations to 8 days at Mount Dillon, Co Roscommon.

Wind: No sustained wind speeds greater than a Near Gale 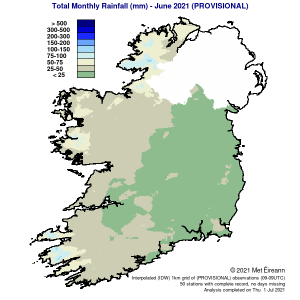 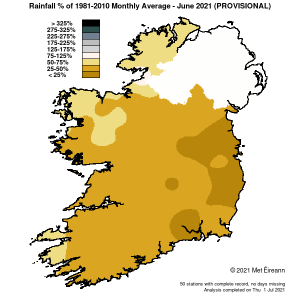