Cold, wet in most places

The cool theme from the end of December with the Jetstream displaced to the south, continued through most of January 2021. Blocking high pressure to the west of Ireland, moved to the north by the end of the first week, keeping it mostly dry and cool, with a northerly airflow veering easterly. A weak cold front moved southwards over the country on the 7th, bringing wintry precipitation with lying snow in places. This introduced a northerly airflow again, which kept it mostly dry up to the 10th. A westerly airflow took over from the 11th as the high pressure to the west moved away. This brought a milder but more active spell of weather with rain or showers on most days up to the 20th. Atlantic low-pressure systems brought frontal rain, especially between the 11th and 13th for the northern half of the country, widespread on the 15th and slow moving weather fronts associated with storm Christoph (named by the UK Met Office) brought widespread rain between the 18th and 20th. A cooler and brighter north-westerly airflow followed for most of the third week with wintry showers in places. A band of wintry precipitation crossed the country late on the 23rd, which left lying snow in many places. The final week saw Atlantic low-pressure systems pushing several weather fronts up over Ireland from the southwest against a cold block to the northeast. This brought milder conditions, especially in the southwest, with prolonged spells of rain and some sleet and snow, especially in the northern half of the country as the fronts pushed up against the cold air.

Rainfall: Above average in most places, highest in the East

All mean air temperatures across the country were below their Long-Term Average (LTA) for the month. Deviations from mean air temperature ranged from -1.6 °C (3.3°C, 3.7°C and 4.0°C mean temperature) at Ballyhaise, Co Cavan, Markree, Co Sligo and Athenry, Co Galway respectively to -0.5 °C (3.5 °C mean temperature) at Knock Airport, Co Mayo. Mean temperatures for the month ranged from 3.3 °C at both Ballyhaise, Co Cavan (1.6 °C below its LTA) and Mullingar, Co Westmeath (1.3°C below its LTA) (both their coldest January since 2011) to 6.4 °C (1.1 °C below its LTA) at Sherkin Island, Co Cork (its coldest January since 2011). The month’s highest temperature was reported at Phoenix Park, Co Dublin on Thursday 28th with a temperature of 13.3 °C. The month’s lowest air minimum was recorded on Saturday 9th Jan at both Mullingar, Co Westmeath and Dunsany, Co Meath with -8.2 °C while the lowest grass minimum was -12.9 °C reported at Oak Park, Co Carlow, also on Saturday 9th Jan. All stations reported air and ground frost during the month. The number of days with ground frost ranged from 9 days at Malin Head, Co Donegal to 22 days at Moore Park, Co Cork. The number of days with air frost ranged from 3 days at Mace Head, Co Galway to 16 days at Mount Dillon, Co Roscommon. 22 stations had their coldest January since 2011.

Sunshine: Highest in the Southwest

Monthly mean wind speeds ranged from 5.3 knots (9.8 km/h) at Ballyhaise, Co Cavan to 15.2 knots (28.2 km/h) at Malin Head, Co Donegal. Gales were reported on the 15th, 28th, 29th and 30th. The number of days with gale force winds ranged from zero days at most stations to 4 days at Malin Head, Co Donegal. There were no strong gales or storms reported this month. The month’s highest 10-minute mean wind speed was reported at both Sherkin Island, Co Cork on the 29th and Malin Head, Co Donegal on 15th, 28th and 30th with 37 knots (69 km/h). The highest gust was 51 knots (95 km/h) reported at Sherkin Island, Co Cork on Friday 29th.

The full statement is available here. 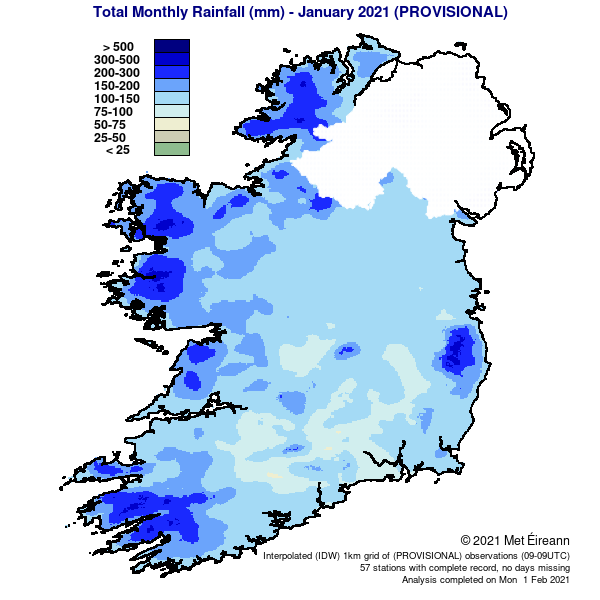 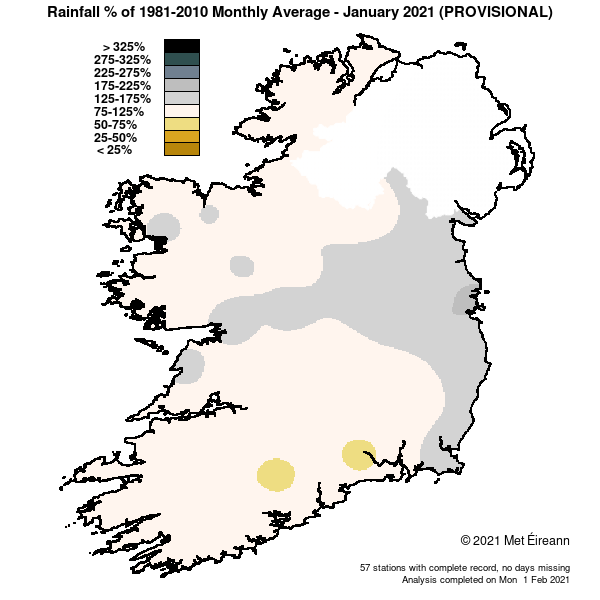 January rainfall as a percentage of the 1981-2010 normal (Provisional)