The first week of February was dominated by a slow moving area of low pressure, which pushed in from the west against a cold block to the northeast over Scandinavia. This brought widespread frontal rain during the first half of the week, followed by showery conditions as the low pressure stalled over Ireland and filled, eventually moving away to the south. This allowed a cold easterly airflow to become established over Ireland for much of the second week. A low pressure system over the Netherlands, storm Darcy (named by the Dutch Met Service, KNMI), helped to enhance the easterly flow, which brought wintry showers to windward facing coasts of the east, South and North, penetrating inland at times with lying snow in places. Towards the end of the second week, several Atlantic weather fronts pushed in from the southwest against the cold air mass over Ireland, strengthening the winds and bringing widespread falls of rain, sleet and snow, with lying snow in places. A milder southerly airflow took over for most of the second half of the month with low pressure to the west of Ireland. This brought bands of frontal rain or showers on most days from the south and southwest, with widespread heavy rain on the 17th, 19th and 23rd. The bulk of the rain fell in the southern half of the country with flooding in places. The month finished dry and settled with plenty of sunshine as high pres-sure built from the south and dominated the final few days of the month.

Rainfall: Above average everywhere, highest in the South

Sunshine: Highest in the Northwest

Monthly mean wind speeds ranged from 8.6 knots (15.9 km/h) at Mount Dillon, Co Roscommon to 21.0 knots (38.9 km/h) at Malin Head, Co Donegal. Gales were reported on numerous days with up to strong gales reported on the 13th, 15th, 16th and 23rd. Storm force winds were reported on Sunday 14th at Belmullet, Co Mayo. The number of days with gales ranged from zero days at Dublin Airport, Co Dublin to 9 days at both Roche’s Point, Co Cork and Malin Head, Co Donegal. The number of days with up to strong gales ranged from zero days at a mot stations to 3 days at Belmullet, Co Mayo. Both the month’s highest gust and 10-minute mean wind speed were reported at Belmullet, Co Mayo on Sunday 14th. The highest gust was 68 knots (126 km/h) while the month’s highest 10-minute mean wind speed was 51 knots (95 km/h). Cork Airport, Co Cork had its highest February mean wind speed since 1997 with 13.8 knots (25.6 km/h).

The full statement is available here 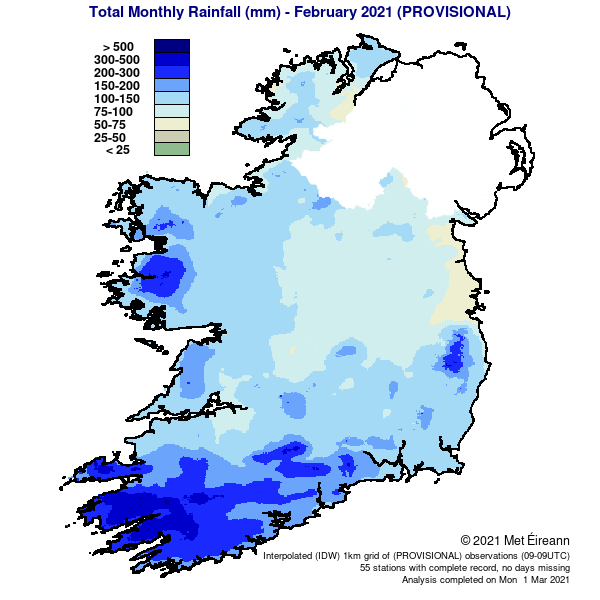 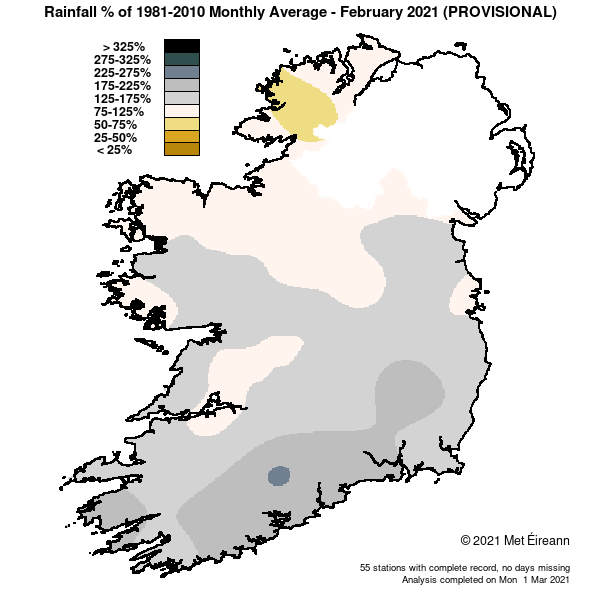