Mild, changeable and windy at times

December was mild with low-pressure dominating the first and final thirds of the month, bringing above average rainfall. The middle third of the month was relatively dry with high pressure in control. The first week saw a mild, mostly westerly airflow bring several Atlantic weather fronts across the country with widespread rain or showers interspersed with clear spells. The week finished with a powerful mid-latitude storm, named storm Barra by Met Éireann, slowly crossing the country from west to east on Tuesday 7th. This brought widespread heavy rain, gales and storm force winds, which continued into Wednesday 8th. Low-pressure to the north and high pressure to the south maintained a mostly westerly airflow up to the 15th, with the high pressure to the south building north and gradually gaining more control. This brought mostly dry conditions between the 13th and 21st as the area of high pressure built over Ireland and slowly moved to the north. There were a few sunny breaks but also a lot of cloud with mist, fog and some frost at night. The weather broke on the 22nd, with the rest of the month dominated by low-pressure to the west of Ireland pushing active weath-er fronts over the country from the south. The rain was especially widespread and heavy on Wednesday 22nd, Saturday 25th (Christmas day) and Thursday 30th, with the South, East and Midlands receiving the bulk of the rain. It remained mild throughout this period.

Rainfall: Above average in most places, wettest in the South and East

All mean air temperatures across the country were above their Long-Term Average (LTA) for the month. Deviations from mean air temperature ranged from 0.8 °C (7.2 °C mean temperature) at Malin Head, Co Donegal to 2.0 °C (7.0 °C , 7.5 °C mean temperature) at Claremorris, Co Mayo and Finner, Co Donegal respectively. Mean tempera-tures for the month ranged from 6.1 °C (1.8 °C above its LTA) at Knock Airport, Co Mayo to 9.6 °C (1.5 °C above its LTA) at Sherkin Island, Co Cork. The month’s high-est temperature was reported at both Phoenix Park, Co Dublin and Casement Aerodrome, Co Dublin both on Friday 31st with a temperature of 14.6 °C. The month’s lowest air and grass minimum was recorded at Mullingar, Co Westmeath with the lowest air temperature reported on Wednesday 13th with -2.1 °C, while the lowest grass minimum was -5.8 °C reported on Tuesday 14th. More than half of stations reported ground frost. The number of days with ground frost ranged from zero days at Roche’s Point, Co Cork to 19 days at Phoenix Park, Co Dublin. Less than half of stations reported air frost. The number of days with air frost ranged from zero days at a few sta-tions to 4 days at Casement Aerodrome, Co Dublin. Seven stations had their highest minimum temperature for December on record (record length ranging from between 11 and 60 years).

Sunshine: Sunny in the South and East, dull in the North and Northwest 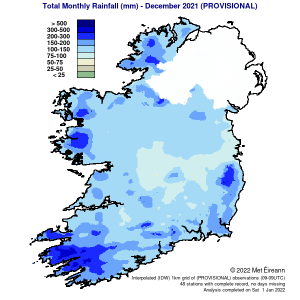 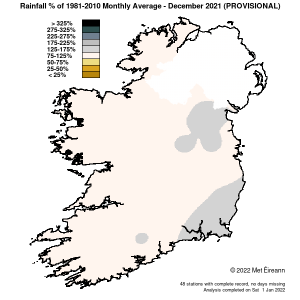