Cool, wet and windy at times

Blocking high-pressure systems to the east and at times to the west and north, led to a pattern with deep Atlantic troughs of low-pressure repeatedly stalling close to or over Ireland during December 2020. This kept Ireland on the cool, northern side of a highly amplified, meandering Jetstream. After a few dry days at the beginning of December, a trough of low-pressure moved in from the northwest and stalled over Ireland and the UK for most of the first week in a cyclonic or northerly airflow. This brought strong winds, with bands of rain or showers at first, but also some dry, cold days with frost and fog at night towards the end of the week as the low filled. This setup continued during the second and third weeks as further deep troughs of low pressure stalled just to the west of Ireland bringing further frontal depressions across the country in a cyclonic or westerly airflow. Active weather fronts brought widespread heavy rain on the 9th and 13th. A transient area of high pressure brought a few cold, dry days over the Christmas period, before more active weather fronts, associated with storm Bella, brought a spell of very wet and windy weather across the country from the northwest on the 26th and 27th. Storm Bella, which intensified to the south of Greenland, moved south-eastwards and stalled just to the east of Ireland, establishing a cold northerly airflow for the remainder of the month, with further bands of rain or showers, some wintry.

Rainfall: Above average in most places, highest in the South and West

Temperature: Below average in most places

Nearly all mean air temperatures were below their Long-Term Average (LTA) for the month. Deviations from mean air temperature ranged from -0.9 °C (4.9 °C mean temperature) at Markree, Co Sligo to 0.3 °C (5.8 °C mean temperature) at Finner, Co Donegal. Mean temperatures for the month ranged from 4.3 °C (at its LTA) at Knock Airport, Co Mayo (its coldest December since 2010) to 7.8 °C (0.2 °C below its LTA) at Sherkin Island, Co Cork (its coldest December since 2010). The month’s highest temperature was reported at Dublin Airport on Friday 18th with a temperature of 14.2 °C. The month’s lowest air minimum was recorded on Monday 7th at Dunsany, Co Meath with -4.8 °C while the lowest grass minimum was -9.4 °C reported at Athenry, Co Galway on Thursday 31st. All stations reported ground frost during the month. The number of days with ground frost ranged from 6 days at Malin Head, Co Donegal to 21 days at Markree, Co Sligo. More than half of stations reported air frost. The number of days with air frost ranged from zero days at a few stations to 11 days at Dunsany, Co Meath. 22 stations had their coldest December since 2010. 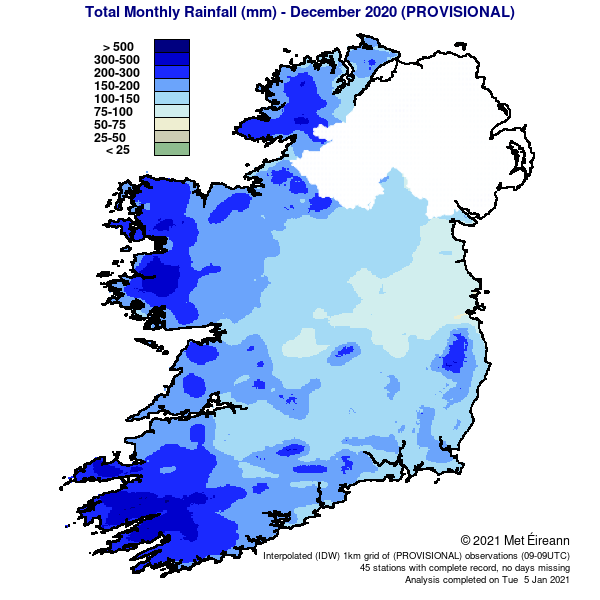 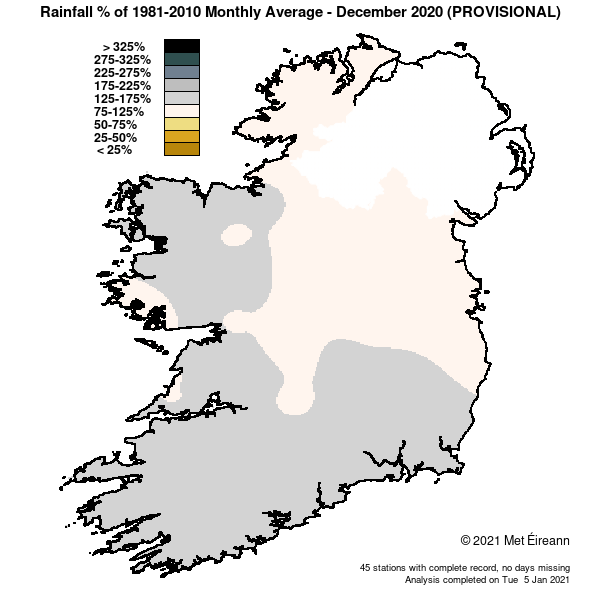