April was a relatively dry month with high pressure, centred mostly to the north of Ireland, in control. The beginning of the first week saw bands of mostly light rain or showers crossing the country from the northwest, as they circled around an area of high pressure to the west of Ireland. The centre of a rela-tively deep area of low-pressure moved close to the north of the country at the end of the first week, bringing further rain or showers, along with the windi-est period of the month. A cooler air mass at the beginning of the second week brought drier conditions with widespread frost at night. A low-pressure system to the west of Ireland, named storm Evelyn by the Portuguese met service, brought a milder airflow, along with bands of rain or showers from the southwest between the 10th and 12th. Further frontal rain or showers pushed in from the west towards the end of the second week and beginning of the third week, but amounts stayed relatively low. On Sunday 17th, an active cold front gave widespread and prolonged falls of rain as it pushed slowly across the country from the west. For the remainder of the month, high pressure to the north dominated, bringing an easterly airflow with mostly dry conditions. It was cool at times, especially in the East, but there was also several warm and sunny days, especially in the West and Northwest. The final day of the month saw a shallow area of low-pressure bringing widespread frontal rain down from the northwest.

Temperature: Above average at most stations, warmest in the West

Nearly all mean air temperatures were above their Long-Term Average (LTA) for the month. Deviations from mean air temperature ranged from -0.6 °C (7.6 °C, the month’s lowest mean temperature) at Dublin Airport, Co Dublin to 0.9 °C (8.3 °C , 10.0 °C mean temperature) at Knock Airport, Co Mayo and New-port, Co Mayo respectively. The highest mean temperatures was 10.0 °C at Newport, Co Mayo (0.9 °C above its LTA). The month’s highest temperature was reported at Phoenix Park, Co Dublin on Friday 15th with a temperature of 18.5 °C. The month’s lowest air minimum was recorded on Sunday 3rd at Mullin-gar, Co Westmeath with -4.6 °C while the lowest grass minimum was -10.1 °C reported at Mount Dillon, Co Roscommon on Friday 1st. All stations reported ground frost during the month. The number of days with ground frost ranged from 4 days at Sherkin Island, Co Cork to 22 days at Mount Dillon, Co Ros-common. More than half of stations reported air frost. The number of days with air frost ranged from zero days at a few stations to 11 days at Dublin Airport, Co Dublin.

Sunshine: Sunniest in the Northwest 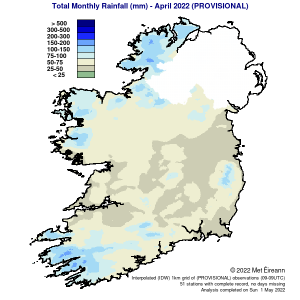 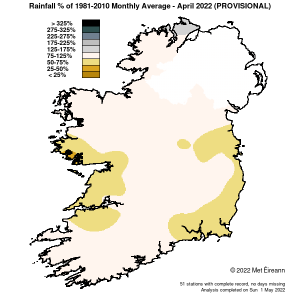