Above average temperatures and sunshine, below average rainfall

January and the first half of February saw the North Atlantic Jetstream displaced to the south, leading to cooler than average temperatures for Ireland. The Jetstream moved north again for the second half of February bringing milder conditions. Low-pressure dominated with above average rainfall in most places, especially in the South during Febru-ary. Storm Christoph affected Ireland between 18th and 20th January. High pressure to the south and east of Ireland throughout most of March led to a mild month with below average rainfall, especially in the South and East. The high pressure shifted to the west of Ireland through April, leading to a very dry month, with cooler and sunnier conditions, as polar maritime air masses from the north dominated. The cool theme continued for May with the Jetstream displaced to the south. However, persistent and slow moving troughs of low-pressure over Ireland brought above average rainfall. June was another very dry month. High pressure kept the South and East sunny and warm, with the North and West cloudier and cooler. July saw intense thundery rainfall at times, along with a prolonged hot and dry spell, with heatwave conditions for many. This led to above average temperatures everywhere and above average rainfall in the Midlands and East. August was mild and changeable with a dry finish leading to above average temperatures once again and mostly below average rainfall. Ireland stayed on the warmer, southern side of the Jetstream through most of September, October and November. High pressure to the south of Ireland dominated through much of September and November giving warmer and drier than average conditions, while low-pressure to the west of Ireland dominated through much of October, giving warmer and wetter than average conditions. Storm Arwen brought northerly gales on 26th November. December was mild with above average rainfall for most. Storm Barra brought the strongest winds of the year on Tuesday 7th.

Rainfall: Below average at most stations 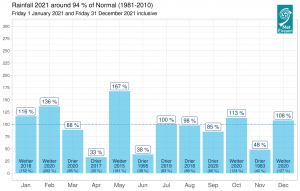 Provisional monthly gridded 2021 rainfall (%) for Ireland on a monthly basis. 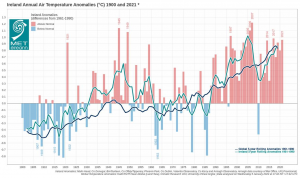 Sunshine: Sunniest in the South and East

Annual mean wind speeds ranged from 5.6 knots (10.4 km/h) at Ballyhaise, Co Cavan to 13.8 knots (25.6 km/h) at Malin Head, Co Donegal. There were numerous days with gales and strong gales with up to storm force winds on the 14th Feb, 26th Nov, 7th Dec and 8th Dec. There was violent storm force 11 winds observed on 7th Dec during storm Barra. The number of days with up to strong gales ranged from zero days at a few stations to 11 days at Malin Head, Co Donegal. The number of days with storms force winds was 2 days at both Mace Head, Co Galway and Malin Head, Co Donegal. Both the year’s highest gust and 10-minute mean wind speed were reported on the 7th Dec during storm Barra. The highest gust was 73 knots (135 km/h) reported at Sherkin Island, Co Cork while the year’s highest 10-minute mean wind speed was 56 knots (103 km/h) at Mace Head, Co Galway. Four stations had their lowest yearly mean wind on record (record length ranging from between 9 and 16 years). Thirteen stations had their lowest yearly mean wind since 2010 and Dunlin Airport, Co Dublin had its lowest yearly mean wind since 1959. 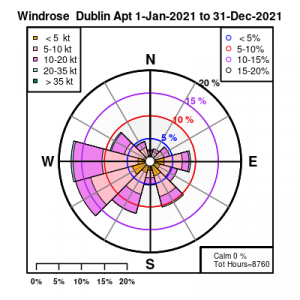 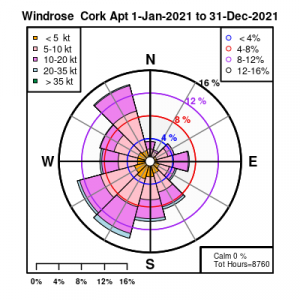 EXTREME VALUES FOR 2021 AT SYNOPTIC STATIONS