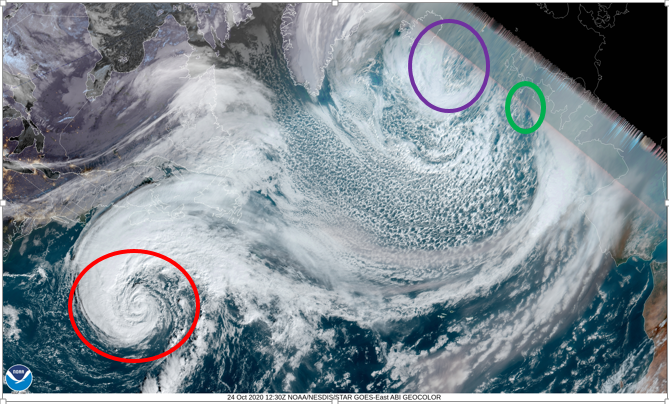 The low centre to the northwest of Ireland is expected to remain slow-moving over the next day or so steering in heavy blustery showers at times and strong and gusty winds, before it tracks east-southeastwards over northern Britain on Monday.

Meanwhile, Epsilon is expected to transition to a mid-latitude low over the western north Atlantic by Monday. Its remnants will then become absorbed into another low pressure system currently tracking eastwards over Newfoundland. Frontal rain associated with this low pressure system containing the remnants of Epsilon, is expected to cross the country on Tuesday. Current guidance keeps the low pressure system itself – and by default the strongest winds – out to the west of Ireland in the central North Atlantic. But as always, Met Éireann’s Meteorologists will continue to monitor the situation for any changes.

The Jet Stream is likely to remain strong through the subsequent outlook period, producing spells of wet and windy weather.

Hurricane Epsilon rapidly intensified to a category 3 Hurricane last night (Irish Time) over the central Atlantic, southeast of Bermuda. It has since dropped in intensity and is currently analysed as a strong category 1 hurricane by the National Hurricane Center. Tropical storm conditions are still expected on Bermuda today. A gradual decrease in intensity is expected as the system starts to move over colder waters and encounters strong winds aloft. Epsilon is still forecasted to curve north-eastwards to the east of Bermuda over the coming days. It is still unclear how exactly Epsilon will impact weather conditions in Ireland but the timeline remains the same – early next week around Tuesday/Wednesday. Met Éireann meteorologists will continue to monitor the system closely as it goes through extra-tropical transition over the next number of days. 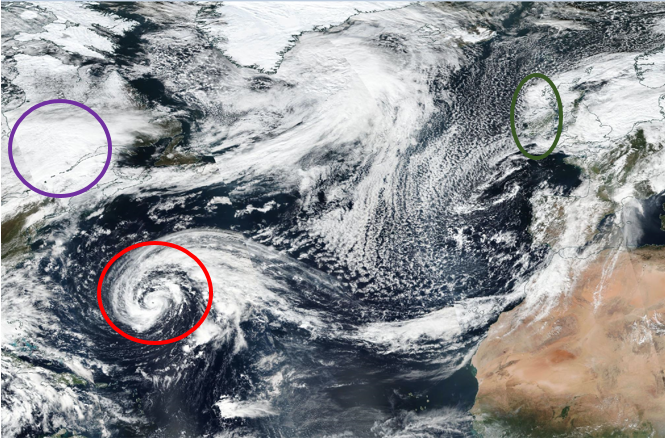 As referred to below (yesterday’s commentary) though, another Atlantic low pressure system is still expected to engage with the Jet Stream and rapidly deepen during tomorrow Friday (see satellite picture above). The low itself is expected to track between Iceland and Ireland but the associated active frontal system is still expected to cross the country on Friday night and Saturday morning resulting in a period of very strong winds and heavy rain.

Status Yellow Wind and Rain warnings have now been issued for this system.

A status yellow rain warning has been issued for Galway and Mayo valid from 9pm Friday 23rd Oct to 9am on Saturday 24th Oct.

2 yellow wind warnings have been issued with different validity times:

A status yellow wind warning has been issued for Donegal, Galway, Mayo, Clare and Kerry valid from 10pm Friday 23rd Oct to 7am Saturday 24th Oct.

A status yellow wind warning has also been issued for Cork, Waterford and Wexford valid from midnight to 11am on Saturday 24th Oct.

These warnings will be reviewed over the next 24 hours and any updates will be issued as required.

For all the latest information go to: www.met.ie/warnings

After a period of quieter more slowly evolving weather earlier this month, our weather pattern is looking decidedly more generally changeable and at times very unsettled through the rest of October. As is often the case, this is largely in response to a strengthening of the Polar Front Jet Stream. The Jet Stream is identified as a zone of fast moving air high up in the atmosphere and it is responsible for driving and developing low pressure systems across the Atlantic towards our shores.

The strengthening of the Jet Stream is not unusual at this time of year as the temperature gradient between the tropics and the poles increases in response to the shorter daylight hours as we head into the winter months. The greater the difference in temperature, the stronger the Jet Stream becomes. This goes some way in explaining why we get most of our storms during the winter half of the year as opposed to the summer, although as we have seen recently with Storm Ellen and Francis, storms can and do happen at any time of the year!

Animation of forecast Jet Stream (Purple) overlaid with Surface pressure (black isobars)  from the ECMWF over the next several days.

Over the coming week, the Jet Stream is expected to help deepen areas of low pressure and direct them generally between Ireland and Iceland. Associated Atlantic frontal systems will cross the country resulting in successive spells of wet and windy, potentially stormy, weather, especially this weekend and on into early next week.

On Friday, an Atlantic low pressure system is expected to engage with the Jet Stream and rapidly deepen. The low itself is expected to track between Iceland and Ireland but the associated active frontal system will cross the country on Friday night and Saturday morning resulting in a period of very strong winds and heavy rain.

The next Atlantic low pressure system that will affect Ireland after Saturday, will be early next week and that low pressure system will likely contain the remnants of Epsilon, currently a category 1 Hurricane which is expected to curve northeastwards to the east of Bermuda this weekend. As mentioned in one of our meteorologist commentaries from last month, (see “The 2020 Hurricane Season so far” meteorologist commentary) we passed the peak of Atlantic Hurricane Season quite a while ago. In that commentary, it was also mentioned that:  “The delayed warming of the Atlantic Ocean forces the location of extra-tropical transitioning storms northward late in the season so here in Ireland, we are more likely to see the remnants of these storms influencing our weather over the coming weeks and months.” And looking at the current set-up in the Atlantic right now, we can see that situation appears to be developing. 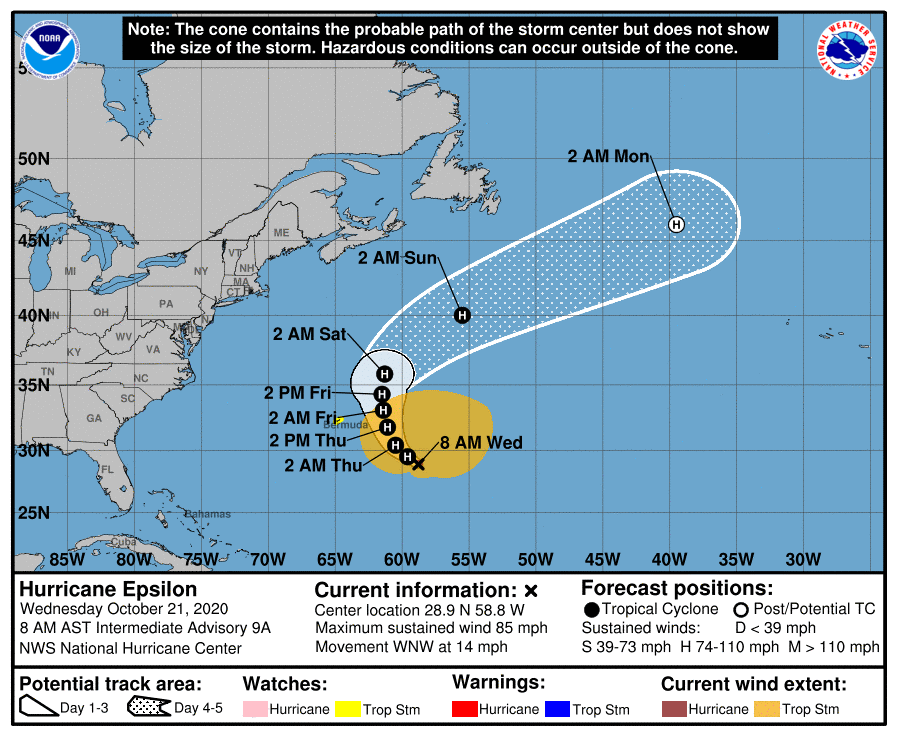 How Epsilon will interact with the Jet Stream is still uncertain at this stage, but certainly the current guidance across multiple models is suggesting a very deep low will be positioned to the northwest of Ireland in the north Atlantic early next week. This is likely to again bring a period of strong winds and heavy rain to our shores. How strong the winds will be will be dependent on the depth, location and track of the ex-Epsilon low. Whatever the case, Epsilon will no longer be a hurricane at that stage as it will have transitioned to mid-latitude low.

What happens to a hurricane structurally when it transitions?