Low pressure will keep our weather unsettled this week with spells of heavy rain at times, however there are signs of more settled conditions on the way next week, as high pressure builds over the weekend.

Monday will see spells of heavy rain developing across the southern half of the country, before clearing through Tuesday morning.  Tuesday will be bright and breezy with scattered showers, though turning drier through afternoon.  Temperatures on both days will be around average, but it’ll turn much milder and more humid from Wednesday, due to warmer air moving across Ireland associated with ex-Hurricane Sam.

Met Éireann meteorologist, Elizabeth Coleman, said: “Currently off the east coast of the U.S., Hurricane Sam will move north-eastwards towards Iceland over the next few days, weakening as it does so.  The path of ex-Hurricane Sam will allow a very mild, tropical maritime airmass to move across Ireland, bringing temperatures well above average for the time of year from Wednesday onwards.” 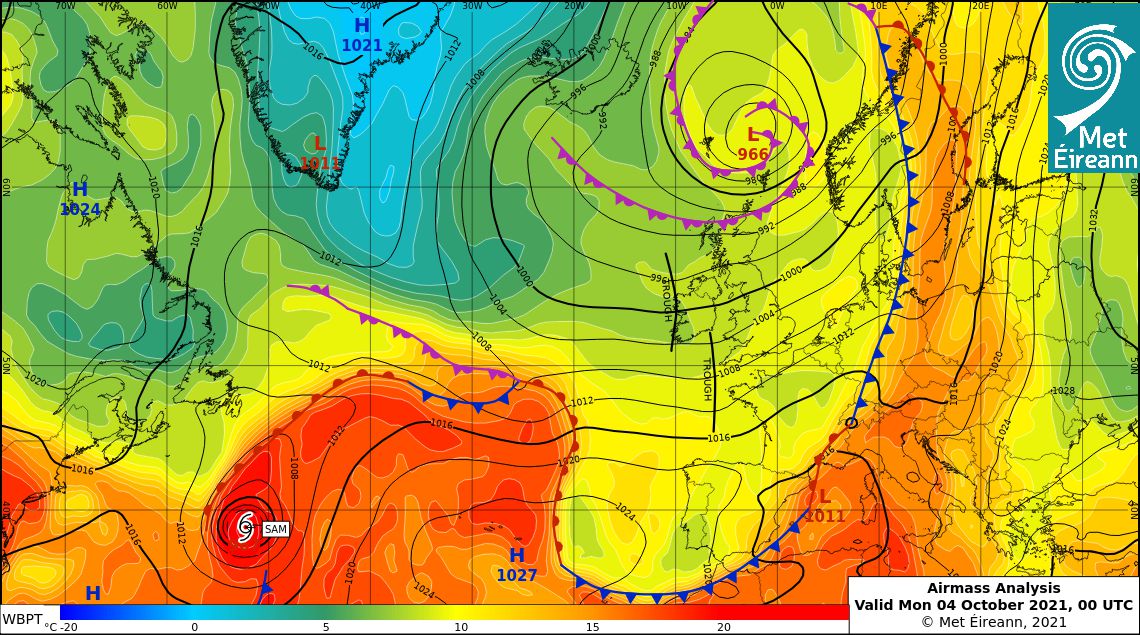 Temperatures from mid-week onwards will be around 15 to 19 Celsius, the average maximum temperature in October is around 10°C.

Forecaster Liz Coleman continued: “The remnants of ex-Hurricane Sam will remain to the far west of Ireland, however the tropical airmass will bring a good deal of dull, cloudy and drizzly weather with mist and fog affecting hills and coasts. Some brighter spells may develop in the east at times. However, a weather front with waves will become slow-moving over western parts of Ireland on Thursday and Friday bringing some persistent falls of rain and the likelihood of local flooding – we have issued a Weather Advisory for some western areas where rain is expected to be heaviest.”

Looking ahead to the weekend, forecaster Liz Coleman continued: “The front is expected to move eastwards over the country on Friday night and Saturday before clearing into the Irish Sea. It will be followed by an area of high pressure building across Ireland for the rest of the weekend bringing more settled conditions and it will gradually turn a bit cooler again.  Next week looks fairly settled with seasonal temperature values and high pressure generally dominating, though a little rain may affect some northernmost parts at first.” 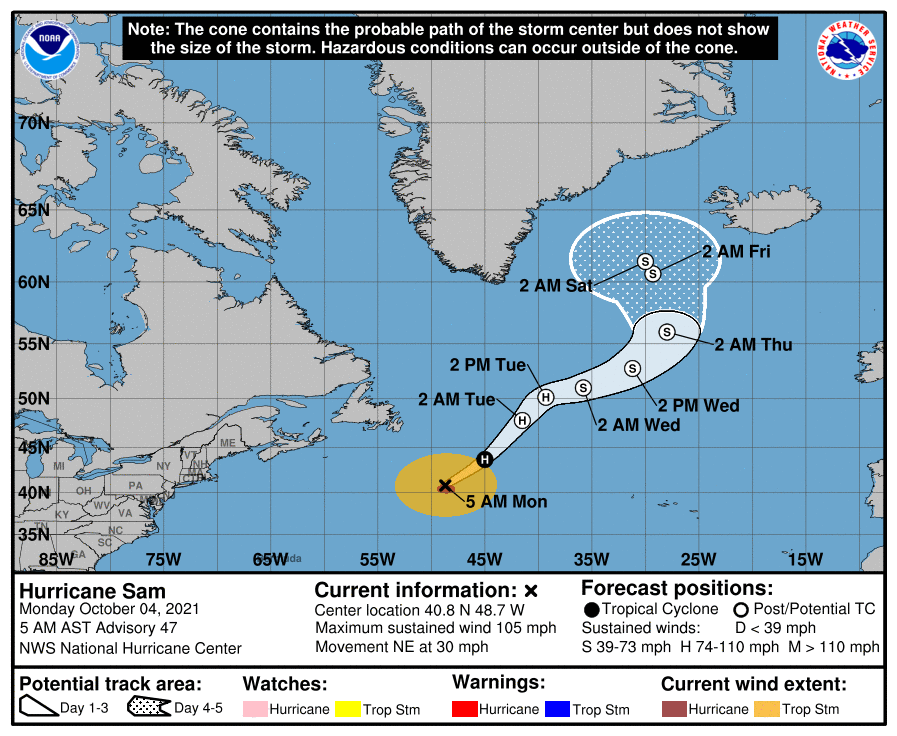 Provisionally the warmest September on record

Whilst October so far has seen fairly typical Autumnal weather, the month of September was provisionally the warmest September month on record for Ireland, with mean temperatures 2.1°C above their long-term averages (LTA 1981-2010).

A new station temperature record of 27.9°C was recorded at Shannon Airport (in a record going back 75 years), whilst Phoenix Park in Dublin had its warmest September in 122 years, with a mean temperature of 15.8°C (2.4C above its LTA).

Dr Sandra Spillane of Met Éireann’s Climate Services said: “September 2021 has been a notably warm and dry month across the island of Ireland, with mean temperatures well above average and below average rainfall.  Much of September was characterised by periods of high pressure which often brings dry and settled weather, before conditions turned more Autumnal towards the end of the month as low pressure moved across Ireland.”

The latest climate projections for Ireland signal a warming trend across all seasons into the future.  More details on September 2021 in our Monthly Statement. 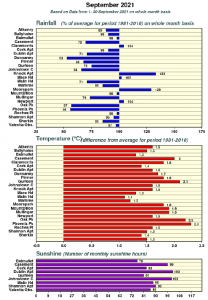 For the most accurate and up to date forecast for your area on the Island of Ireland go to met.ie.  The latest weather advisories and warnings for Ireland are on the Met Éireann Warnings page. These services and more are available on our free app – available from the App store for iPhone, and Play store for Android. Follow us on Twitter and Facebook for extra weather and climate content.  You can also listen to the latest national forecast on our daily podcast.